I am being Brilliant are you? and how to avoid a giant badger.... 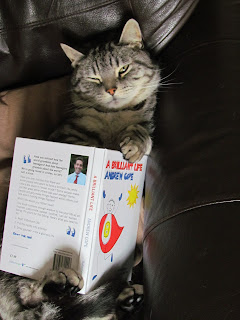 I am totally brilliant are you. That is how I like to think of my self now. This a  personal blog post with a review if that makes sense a sort of combo a deal a bargain if you please.So here we have a cat with a copy of Andy Cope's "A Brilliant Life: By Andrew Cope.


Firstly I am usually a happy sort with the odd moan. I help people I network  , I am not every one's cup of tea but I am me. I do so much for people and school etc I never really blow my own horn though perhaps I should. I have tirelessly being clogging up twitter, etc with my endless tweets emails about my school fair. I admit I am not one of those people that seem to be a crowd magnet, there are people who speak at me and not to me. it's one of those things you have to accept. I try to like everyone though its not possible is it really. I am a great observer and absorber , I have a mind like a steel trap. Yet I have no self confidence,what a shocker.


I know what you are thinking I am going to spout some hippy cr*p but I am not. Secondly be careful what you tweet a prime example is that premiership footballer . What you tweet could have a knock on around you and perhaps leave people being less than brilliant. I found myself being a purpetrator of this without realizing what I had done. Yes I was compounded by grief but I am realizing what a slippery slope twitter can be. Never tweet anything as someone told me you wouldn't want a million people to see. A phone call is always better, more composed rantings I suspect.


So we come to Andy Cope's " A Brilliant life"

First glaces you may think its a children's book it's not it aimed at your morbid self perpetuating energy sucking teenagers and turning them into a radiator of internal happiness. Of course along their journey there will be breakdowns, but then again  what appliance doesn't break down at some point. Its at this point you  make  sure you are surrounded by those people who will promote you self happiness.

Th book follows a sequence of advice through words and pictures. It is something you dip in and out of leave it in the bathroom read it on the toilet. leave it on a grumpy bosses desk anywhere. Its like the banksy of the book world it should just appear anywhere and  everywhere.


So how does this book start well at you sitting comfortably then I will begin......

It starts with a young person feeling average kinda OK  average. It goes on to explain the traumas that teenagers face, school exams homework etc.Of course all this negativity becomes a habit, a bit like you know going to the supermarket buying the same cereal; when you know 2 minutes down the road you could buy it a whole thirty pence cheaper. Then he learns the big '5' and takes you through the process of how this young chaps starts to feel more positive. Let's be honest its not going to come as a complete shock to you when I tell you that this young teenager ends up feeling and acting positive now then is it?
Now I do expect you to go off and purchase this book it very might well change your life.... or that of your life force sucking teenager.

Now Andy Cope is a jolly nice chap he helped me at my school fair and even bought along his new spy pup " Star' he can be found on twitter as @spypup also you can visit him at  http://www.artofbrilliance.co.uk/

He also dragged his trusty sidekick  Ritchie from Givingift which is a great charity organization.


I'll bet you are all wondering where the giant badger comes in aren't you? Well at the school fair I was given the task of showing a giant badger round for an hour. ( local mascot from a chain pub). Now the thought of this didn't exactly thrill me with all my talents. Just as I was about to show the giant badger round , why Andy Cope turned up my saviour. I couldn't leave him just hanging there, could I?.  I did the polite thing and talked to him somehow losing the badger.. oh dear. After a long and fruitful conservation I found the giant badger. Sadly it hadn't being flattened in a road traffic accident....