The importance of Outdoor play despite the weather !

Whatever the season there is no excuse not to go out and play outdoors!

It doesn't matter if it's too hot out there (put on a hat and sun cream) or if the leaves are turning brown, the conkers are looking ready to drop. It is raining ,when doesn't it rain in this country. It can be tempting what ever the weather to just plonk them in front of Cbeebies and run for your computer catching up on Twitter or Facebook. Though hopefully you are reading this at at sensible time when your little angels have got to bed after you've been playing outside.The weather is not an excuse not to get out and there and  play. You must have all seen the various government campaigns on the television at the moment encouraging your to take exercise of at least 60 minutes outside. And this doesn't even have to cost you any money in most cases.

At my school we have a canopy so they can play outside even when it is raining. We also have a welly shed and raincoats. So they can play in the puddles, stamp on those crunchy leaves, make mud pies and of course the child hood favourite making homes for wriggly worms. Though making their homes out of stones was not a good idea I discovered as a child !. You don't even need toys as they will produce their own toys from what ever is around them.

Well of course that’s an appealing thought but what about all that outside play that the children got during the summer? Why let it stop just because it’s a bit colder! A few layers, a raincoat and trousers and a pair of wellies and they are all set. In the colder months you don’t even need to give them toys to play with as the changing seasons and the natural toys that they are producing will be enough to keep them entertained.

A sandpit is a marvellous addition to outdoor play just make sure it has a cover otherwise it will turn into a giant kitty litter. It doesn't even have to be an expensive sandpit it can be one you've made your self . Just cover it with tarpaulin. 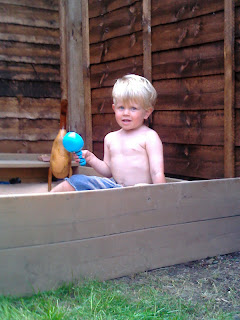 (photo used with permission from @chocorange )

Just make  sure the children have suitable waterproof clothing on if they go to play outside when it wet.

So before you reach for the safety of plonking them in front of a dvd, why not turn off the television get the wellies on( Hunter Wellies if you want to be a scrummy yummy mummy ), dig out a magnifying glass and go looking for insects?( No pulling the wings of fairies !!! ) Or build a den or a fort ?

If you don't get your child into the outdoors they are never going to build up their immunity and be able to fight off those coughs colds and other nasty bugs!

.
So get out in the outdoors and just have fun what ever the weather ! It is England after all. 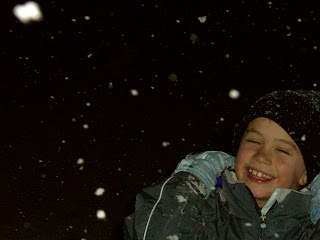