Moving from Reception to Year one transition help .

Working in an infant school is great , being their inspiration means the world to me, I say this because at the term received many gifts. It wasn't the wine or the chocolate that touched me but the cards, one in particular that had a sentiment from a parent. "............. comes home speaking of you fondly, thank you for making her Year 1 a magical time" I know that this child will make a happy transition into year 2 with absolutely no problems. For some children this however is not the case, so here are a few tips they make help the transition from reception to year one. pre Year one is know as EYFS ( Early Year foundation Stage) with a huge emphasis on play and free flow between the classes. There are structured activities within this but it is more relaxed.

So my top tips from moving from  Reception to year one are:

1. Remind them that when they moved from nursery to reception they had less play than when they did at nursery.


2. If they have siblings explain that will will leaning things to teach them and even yourself as parents. We all like to learn new things don't we?

3. Factor in treats and rewards to counteract the fact that there will be less playing, This doesn't have to cost you any money even a trip to the park can help.

4. If its of real concern have a word with the new class teacher before they start, sometimes they may have be split up from their friends. This is less likely to happen in year 1 but nether less it might, this is more of an issue in the transition from Infants to Juniors.


4. Don't forget they have just had  six weeks off, that is enough to confuse and disorientate the adults let alone the children.

5. Remind them that their Play times will be an opportunity to let off steam. I know that at my school time we have 'Golden Time ' where some sort of treat comes into play.


6. Routine is key try and keep to a routine during the holidays. They may go to bed later during the holidays, but week by week gradually bring this make to their usual bed time that they have when they are at school. Also always  make sure that they have had breakfast before they go to school, and not on the way to school. it is hard sometimes when you have a line line of children behind you making you look like ' The Old woman who lived in a shoe'

6. Encourage their development of characters they are keen to  be individuals , but need the safety nerd of the herd of the classroom!

7. Any child can find it hard to make the transition , I am not going to say its just boys that have these problems. It is the step up in concentrating that can also before an issue, So play games that help with with this situation again from snap - junior monopoly. Perhaps have a toy that will help them  go to school and be waiting for them when you pick them up.

8. Accept it is going to me a little tough for the first few weeks and don't forget the teacher/ teacher assistant is just as likely to be stressed ( despite it being their job)

9. Make them part of the process I can stress how important this is. Let them within reason choose their school shoes, bag etc. It really does make them feel grown up, though at the same time it has to be fun they are only children after all.

10.  Don't mourn them going into year one , I know its hard seeing them grow up. Try and focus on what joys and achievements this next stage will bring.

Also my school each class has its own bear which you can take on holiday or for the weekend . This teddy bear follows the class through their time at the Infant school, I think this is very sweet and another nice touch that makes the transition from school year to another school year that much easier. 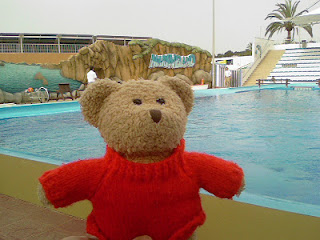