I love think that make my life easier especially when I am on my holidays. I was given the chance to review the New Air Wick Odour Dectect. 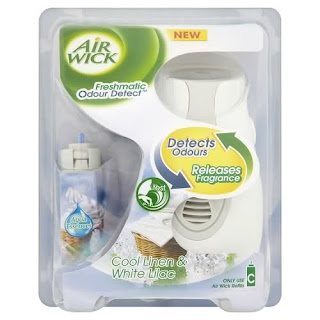 Now as my friend was going to come and look after my cats for the week I was away I felt same in the knowledge that this was fragrancing my home whilst I was away. And that my friend didn't have to come into pongy house and feed my cats.
The new Air Wick Odour Detect is rather clever( shame it can't do the DIY really) it actually seeks out the smell and zaps a spray into the air.


A new survey released today by Air Wick, for the launch of the NEW Air Wick Odour Detect™ air freshener, reveals that 79% of people notice unpleasant or distinctive odours in someone else’s home, that’s almost a whopping 4 out of 5 people! Picking up on the stink isn’t where it ends though, over half of the people surveyed (51%) admitted to judging a person’s cleanliness because of it. The survey also revealed the following:
·        82% of people are embarrassed by bad odours in their home when guests are around with 43% of people revealing that their most embarrassing moment would be if their bathroom was left smelling less than fragrant.
·        66% had noticed unpleasant odours in their own house and 39% worried about how clean their house was as a result.
·        43% of people would apologise for unpleasant odours in their home when guests were over with a further 20% of people admitting that they couldn’t relax in their own home
·        76% of people surveyed noticed distinctive pet smells. The top three worst odours in the home voted for were: the kitchen bin, the bathroom after someone in the house has used it, the kitchen after you have cooked. 46% of people actually said that a smelly bin was their worst kitchen nightmare
·        82% of people said they felt happiest and most relaxed when their home smelt pleasant with 43% of people feeling most proud when their home smelt its best
NEW Air Wick Odour Detect™is the FIRST air freshener that uses odour sensor technology to automatically detect and overcome unpleasant odours, meaning you don’t have to worry about it!
Now you can be confident knowing that your home will always be welcoming and pleasurable for family and unexpected guests. So if your pet let’s off an unpleasant odour, your partner uses the bathroom or last night’s dinner smells linger longer than you would like, you don’t have to panic!
A result of 5 years of research and development, NEW Air Wick Odour Detect™ uses the same technology found in high end cars such as BMW and Mercedes. The Odour Detect can sense thousands of odours so you can be confident knowing this clever device is taking care of your home and making sure it always smells good.
A spokesperson for Air Wick said:‘As the statistics from the survey prove, it’s not just the look of our homes that is important, smell plays a vital role in how we feel in our own homes and other peoples. A huge 82% of people feel embarrassed by bad odours in their own home when guest are around, with over half saying they judge people because of it. Air Wick Odour Detect automatically detects smells so if you have become accustom to them or just don’t have time to maintain a pleasant smelling home, the product will overcome the whiffs for you so you don’t have to feel embarrassed or be judged because of it!’
NEW Air Wick Odour Detect™ Compact will be available to purchase from July 2011 at all major supermarkets,with the NEW Air Wick Odour Detect™ Max being available from August.
Air Wick Odour Detect™ is available at all major supermarkets
·        Air Wick Odour Detect™ is available in the following sizes:
Max(21cm tall x 8.5cm wide) RRP £13.99 –for larger rooms such as the Living Room
Compact (13cm tall x 6.5cm wide) RRP £9.99 –for smaller rooms such as the Bathroom
·        Air Wick Odour Detect™ starter kits contain:
Air Wick Odour Detect Compact starter kit – 1 Compact diffuser, 1 fragrance spray (choose from Cool Linen and White Lilac or Sicilian Lemon and Ginseng) and 3 AA batteries
Air Wick Odour Detect Max starter kit – 1 Max diffuser, 1 fragrance spray(chose from Cool Linen & White Lilac or Smooth Satin & Moon Lily)and 3 AA batteries
·        Refills for both the Max and Compact are available in a wide range of fragrances RRP £3.49
·        For more information visit www.airwick.co.uk
And I came back from holiday to a lovely smelling home with no whiffs and lingering smell. This is different from those air fresheners you plug in because it is stand alone. I shall be buying one for up stairs and placing it in my son's room as I am sure there is something starting to grow in there. !!! So for cooking your Chicken Tikka meal to the smells and whiffs family life creates, this is a product I think is great.