The Bat in the Cat

Picture if you will a dark and stormy night with moonlit shadows hanging ominously, strange sounds that made the hairs on your arms stand up on end. Combine this with a night at the cinema to see at the time one of the most hyped films of the late 1980s then you have Batman.


Also throw into the mix after seeing this film a large Victorian house with rattling sash windows, creaking floor boards .


Coming back late at night after seeing you guessed it 'Batman' then mine and Mr T senses were somewhat heightened not tingling in a  Spider man sense sort of way but more alert than usual.

Suddenly there was a tapping at the window ....

And again there was an evil tapping  at the window. This time Mr T had heard it and in true SAS style he instigated the secret hand signal code.

Which consisted of pointing and gesturing at me to go investigated and in return I replied with hand gestures that I do believe are  not on a UN peace keepers mandate.


A sudden scraping at the window not like fingers down a blackboard but more like a serial killer trying to get in.

And as my old rattling Victorian house was ideal for number of killers to live Norman Bates, that rather nice chappy from the shining and the uber friendly dentist from Marathon Man.

It was left to me to investigate the situation arming myself with Mr T cricket bat, a girl guide whistle and a torch I opened the back door.

I jumped out shouting "Ah haaa in a Kato style ( that ninja chap from Pink Panther) ...

To find our old cat sitting there purring on the window sill with a bat in its mouth. 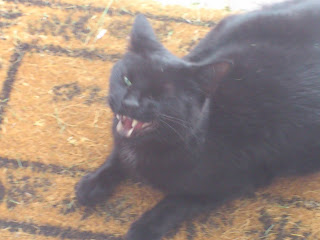 I rescued the bat putting in gently in a shoe box and directed Mr T to back that all important call to ...