Inspiration for the nation

In a heartbeat I wish it was the Opening Ceremony of the Paralympics again, true the word legacy has been given out like somebody handing out Smarties but so what. It has stirred something in me and I know I am blogging about it again but sometimes there comes a moment in your life and you just have to seize with all your might. I think I changed that day seeing peoples capacity for human joy was like an intoxicating drug. Hand on hand I wish that everyday could be like that.

The Olympics and Paralympics were if you were a call to arms a war cry in essence except the bang of drums was every ones hearts beating in unison. 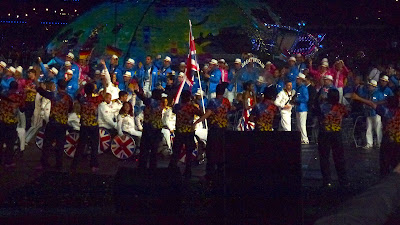 Like Splodz I too was an active child along with Brownies,Guides,piano playing,Chess,Choir,Archaeology club though me and gymnastics never did seem to get on , I was a mystery to my PE teacher on this. With school reports saying phrases as "uncoordinated" which resulted in my mother dragging me off the the doctors.

I tried out for various teams at my Upper school I wasn't good enough for the tennis team, rowing ( not good I couldn't swim ) .  ,Orienteering team yes that's was me ,Chess team yes I was in that I was a Times Challenge player.It broke my heart when I wasn't quite fast enough for the Cross Country team .. darn those fair haired long legged girls ! But just because I had a knock at school it didn't deter me from sport outside of school. And by a knock I mean a knock to my self confidence buts it case of picking yourself up and pushing yourself to your limits.

Its interesting what Splodz says about picking one thing for me it really should have been the running that I concentrated on more though one girl at my running club did that and she was Paula Radcliffe.
Having gone to the Opening Ceremony of the Paralympics which you can read about here. I really do have a happy beat in my heart about what I do. I am hoping my positive attitude rubs off on m son who is also a keen sport mans and I think he suffers from activity overload like I did with his rugby,football,cricket and now he is going to take up Badminton and the reason why ? that's right you guessed it it was the Olympics. And if that doesn't make your sing because the next generation is being inspired then I don't now what will.

Stand up be proud , make yourself heard and be counted.

Everyone  can be just like those wonderful games makers... 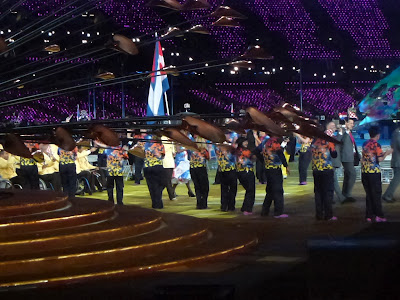