Today I am thinking about children's television , I am not going to indulge you with a trip down memory lane but the simple fact that these programmes can be quite quite influential in children's and our own lives.

I remember when my own son was small and the blessed  adorable "tweenies were on the as my Grandad called it the googly box . It's instrumental in delivering a moral, practical lesson without which our very souls would be at stake.

The particular episode that I remember watching when my son was what to do in a medical emergency . All the emergency services were covered then the really , really helpful bit how to call 999


So with all that really useful information buzzing around his little noggin , I set him down to play .. Yes you guessed went to play emergency services with his playmobil characters. After establishing that this was a rare "mummy moment " I escaped to the solace of a cup of tea. I was gone a nano second but as we all know in "mummy" world that's like ten years.

So after my cup of tea I went to see how the little cherub was doing.. I could hear loud voices( these were not in my head) so it was thumbs up for interactive play. So I popped my head around the door and my son was quietly talking to his playmobil . But I could still hear but what was now quite angry voices this time coming from my bedroom, the phone was off the hook.

"What service does Milo Twenie need?"

OH @@@@ my son had called the emergency services for Milo from the Tweenies.

I grabbed the phone and explained and apologised ...

They were somewhat understanding .....

"Don't worry Milo they firemen will be here soon" 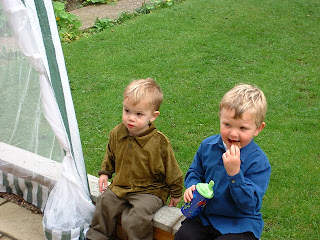