Torte towers is what  I'm going to call this it was meant to be a cake but it didn't turn out that way so I had to think on my feet and turn it something in the end which was quite spectacular. I was trying to following a Hairy Bikers recipe and I was confidant of my culinary prowess I suspect I was a bit cocky.

I followed the recipe but decided not to ground the nuts up and I used milk chocolate instead so I thought that's fair enough and the recipe would work with my changes. How wrong was I , it didn't rise as I thought it would. In this age of food waste I really don't like throwing food out and especially as I had used all those egg yolk and eggs white, I could sense that if I was in the Bake off Paul Hollywood would have been glaring his smokey blue eyes in my direction. I think Mary berry would have been sympathetic but I do know that I think they would have celebrated my final result which saw me coming back from the brink of baking disaster. 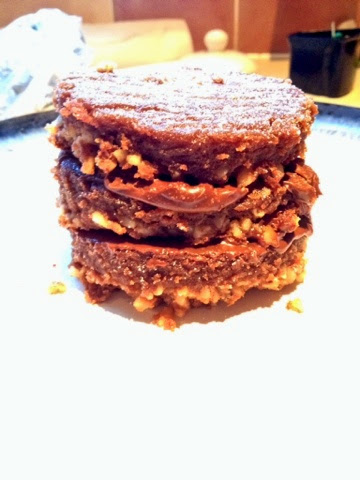 Thursday: Flat bread not sure what with ...