What Hipster Cats Love To Eat 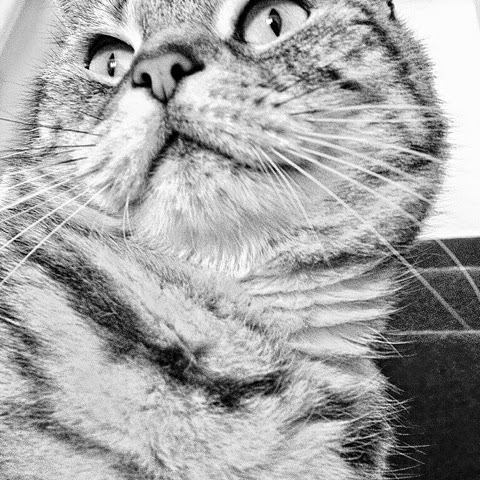 Rolling in time for hipster Shoreditch cats, except we live in Derbyshire but hey that is a moot point!

I truntled downstairs to get a glass of water as I  have a poorly throat still  , the cats are in bed with Rollie sleeping on top of his Igloo bed don't ask ( read here to find out more about his sleeping habits ) no passing here for sympathy * cue dead pan laugh *  I spy that Jack has his eyes focued on a spot under the kitchen storage trolley I look under there is a mouse, now it wasn't doing a song and dance routine I hasten to add neither was it holding cheese or being middle class quinoa. it was just simply sitting there doing mouse actions , not the YMCA but just twitching.

The mouse the lambasted in many a cartoon and comical moment except when it is in my kitchen remembering it is 5 Am so then I call the husband instead of gently whispering in his ear to remove the mouse I bellowed up the stairs. House woken , grumpy husband , grumpy teen bemused

Rollie nor Jack couldn't give a flying paw about the fuss they had caused and I blame them of course * coughs After all the fuss that died down and the mouse had been released , I swear it was mocking the cats. Then I got to thinking about how much do I really know my cats and this is where Applaws come in as they have a questionnaire on Facebook about how well you know your cat or your dog, and going on this morning I though that the answer to the first question would be that cats spent most of their time catching mice but apparently this isn't the case, I'll not spoil it for you but do go on and have a go for yourselves.

Dining choices for Rollie and Jack


In reality I am sure Rollie and Jack would like 5 star dining and I was quite shocked when I looked at A recent infographic that some pet foods only contain 4% natural food where as Applaws contains 70% . I mixed feed both Rollie and Jack and after this I shall be looking to at petted a little bit for carefully as cats have delicate tummies too .

Disclosure: Rollie and Jack are being a hamper as a thank you for this post, as I speak they are stalking the postman , we are on postman number 2 we don't know what happened to the first one , all that was left was his postman bag .....  I did hear something heavy being dragged through the cat flap one day but I am sure it wasn't a leg .....