How My Worse Moment Became My Best

My son was a good baby. I know you’re not supposed to say that because all children are a gift and labels stick and yadda yadda yadda but seriously the kid was easy. He had his moments of course and he was never a fan of sleeping but during the day he was super chilled – he ate what he was offered and was happy to hang in a bouncy chair for an episode of Bake Off. He was a pretty low maintenance little dude. My friends told me, ‘It’s your parenting! It’s because you’re such a relaxed mum that he doesn’t give you much trouble.’ And fool that I am I started to believe them. So when one morning Roscoe woke up as a toddler, complete with an intense need to destroy; an alarming ability to ignore boundaries and an unwavering commitment to refusal, it hit me like a Red Bull laced espresso.

To add insult to injury Roscoe also gave up naps, I didn’t even get time to formulate my strategy. I spent twelve hours a day saying, ‘No, Roscoe’ I gave serious consideration to recording the phrase and having is playing on repeat, I could turn it off for the five minutes a day it wasn’t necessary. I couldn’t believe what my darling, placid baby had become. Gone were the long lunch dates, magazine reading in the park and in their place – endless negotiations, battles and meltdowns (on both sides).

For some reason his new hatred of nappy changing hit me hardest. Perhaps because there was no way to avoid it; perhaps because it was so obviously helping him; probably because no one likes being covered in poop. It was one of those changes that my worst moment came. He has the strength of ten inebriated man. Limbs were flying everywhere and his power move, the head butt, was being employed on a frequent basis. As I tried to restrain him, I could feel the tension rise through my body. A sharp pain pulsed on my right temple. My breathing had become ragged and shallow, ‘No, Roscoe, no,’ I said, ‘No Roscoe, no,’ I pleaded and finally, well and truly at the ends of my wit, ‘Roscoe, stop it or I will…’

I’ll never know what I was going to say next and that’s what scared me most. I did not know what I was capable of, I hadn’t lost control of my son, I had lost control of the parent I wanted to be. What was I threatening - I will smack? I will shout? I will abandon you? I suddenly realised I was expecting a one year old to be responsible for an atmosphere that it was my job to create, I had an opportunity to flip a switch and I was gonna take it…
‘Roscoe stop it or I will…tickle!’ I launched into the greatest tickle fest man has known and well, who can resist a tickle fest?  The tension was released, we both were calm and connected and had forgotten what we were angry about. I had turned my worst moment into one of our best.
Now I love when I feel that telltale tension in my shoulders or when my breathing starts to get shallow because they are helpful reminders that I need to stop, connect and find the joy. I don’t even have to think about it because my automatic response is a tickle fest and tickle therapy has proven to be a very restorative process. No matter what when my partner comes back after a long day and asks me how things have been, I can honestly say – we laughed all day. 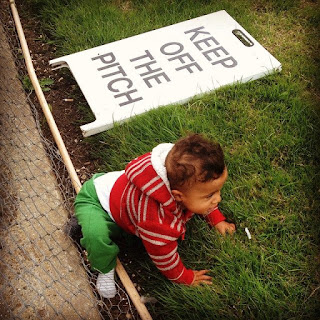