I've always wanted a soup maker , people tried to say you don't need one and that you can just use a blender . I say to those people

I think the most searched for phrase that year was

" how to remove tomato off ceilings " 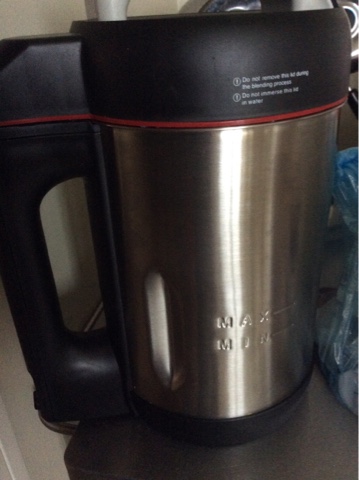 The first soup I've tried is pea and ham following the recipe within the instruction booklet , granted it doesn't have a creme fraishe swirl but a cracking effort for a first go. The soup maker has a sauté function hence the name sauté and soup but I haven't tried this yet but I will as soup needs croutons every now and then . The soup maker also makes smoothies and milkshakes and I've had a few people see this as weird , not really you're not using your saucepan fur just one item unless you're my Nan who had a carrot pan.

I just love my Morphy Richards Sauté and Soup  RRP £54 It will not be a piece of kit consigned to the I'll never use again pile ~ like the juicer I once had.

PS It is very easy to clean and takes no time at all !

I'll be popping by with some soup recipes : aren't you lucky !!!!

Disclosure : The Soup maker has been living with me for 4 days now and long may the honeymoon period continue , my own review / declaration of love .