Papa Johns For A Night in Treat

Sometimes it is nice to threat yourself and with Papa Johns you can do that and it is prefect for a movie night at home or family get together , I know we will be all having a pizza when my son is home from university. I think that my son and his flat mates have tried themselves to a pizza on the odd occasion.


Papa Johns has launched 'Papa's Deep Crust' . Paps's Deep Crust is almost double the depth of a regular Papa John's pizza and is coked in a specially designed pan, using an extra cup of cheese compared to other Pap John's Pizzas.It also features a specially designed tomato sauce.An even tattier treat ; it's now on offer until 26th November 2017 priced from £10.99 from Papa John's outlets nationwide.

As part of this launch of "Papa Deep Crust, Papa John's delivered its brand new deep crust pizza to the deepest part of the London network (Hampstead at 58.5m 192 ft) as part of a unique platform dining experience.The usual comfortable benches were swapped for cosy seating and home comforts to give a taste of a perfect Papa John's night in as diners tucked into deliciously light and fluffy 'Papa Deep Crust ' 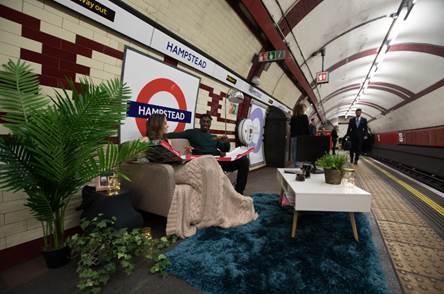 Papa John’s prides itself on using fresh ingredients, ensuring the use of fresh never frozen dough.  The specially formulated recipe features a buttery, seared crust for a fuller flavour and a light and fluffy deeper dough, almost double the depth of regular Papa John’s pizzas cooked in a specially designed pan, to offer an even more indulgent taste than before. A new recipe tomato sauce has also been created, using Californian vine-ripened tomatoes which go from field to can in six hours. Added to this is a blend of signature spices and extra virgin olive oil which are then reduced to create a richer tasting sauce, complementing the new thicker base perfectly. Every ‘Papa’s Deep Crust’ pizza uses an extra cup of cheese, which is spread all the way to the edge of the dough to create a caramelised, crispy cheese crust. Each pizza is then completed with all the favourite pizza toppings, including fresh “store cut” vegetables.


Disclosure Thank you to Papa Johns who sent me one of their delicious pizzas.