History On High At Whitby

I have just got back form a whirlwind visit to Whitby , I went down Friday night and stopped at a comfortable and functional Mastons Inn Penny Hedge  which was about 2 miles from Whitby and is a leisurely stroll into the town and a bit of a climb back. I could do Whitby alright and I have Asthma ( do make sure you have your inhaler though ) Not sure how I got this long into adulthood with not having got to Whitby but I hadn't that was until this weekend just gone. 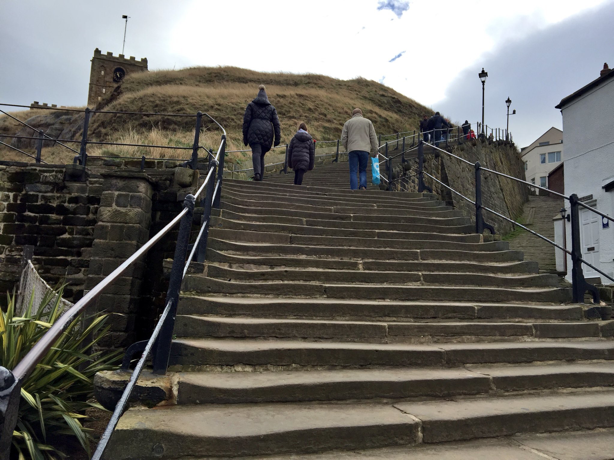 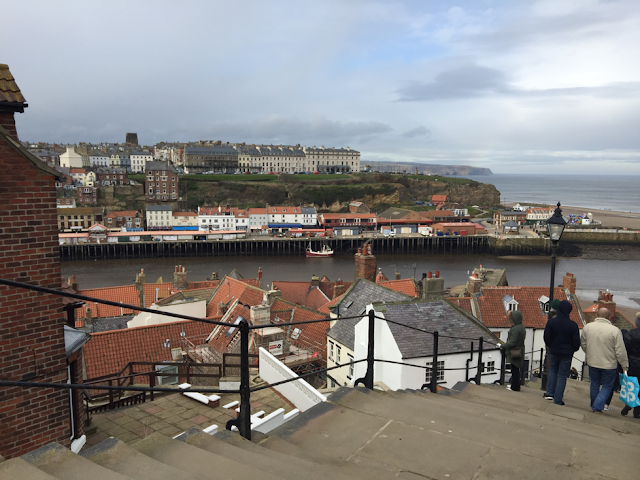 Now I just know I am going to have to go back to Whitby it is one of go those places that reels you in like a fish on a line ( well it is a port and it has a harbour ) and they smoke kippers there . If you don't have fish and chips there then at least you must have chips from one of the many Fish and Chips shops and restaurants .I with my husband ate at an old fashioned in a way Fish and Chip restaurant called Trenchers which is reasonably priced and very delicious , the portions are of your choosing. I think in this day on age but it depends if you want to make that your main meal for the day or sit down / wander round with a bag of chips ( I think it is Seaside law you have to do something like this )

There is some debate on if there is 199 tradition dictates you could them as you go, the 199 steps as I think there is that amount really are a unique attraction in Whitby, the steps lure you spa and you are truly rewarded as you climb up them. Apparently the fist steps were made of wood the steps are also known as the "Church Steps" but they were replaced later on in the 18th century.The steps lead up to St Marys Church and burials stopped in the 19th century sometime and coffins were carried up the steps , the Male relatives carried the Males coffins and like wise the female relatives carried the female relatives.So when you climb up the steps and take a seat that is where they used to rest the coffins on and the pallbearers used to rest.


The steps are now a pathway to stunning views and it is a glorious side over the views off Whitby with chimney topsmrp@aol.com and roofs alike and go the sea the sea that just draws you . The colours of the side side at Whitby are out of this world and no matter that the day might not be sunny , a stunning view is always stunning.Beyond the church of course is the infamous Abbey that was a draw for a particular writer in the shape of Bram Stoker and that is a blog post for another day. 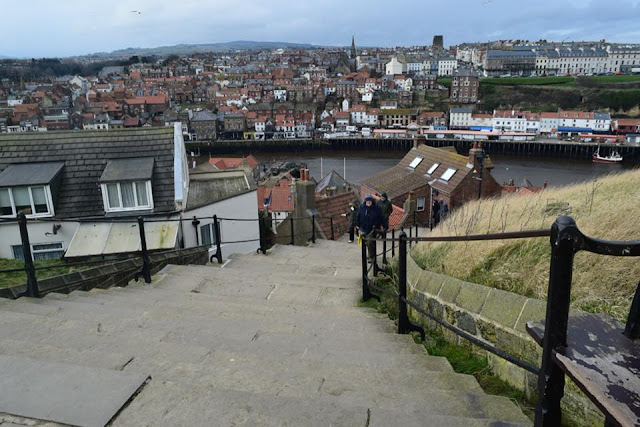 Disclosure I paid for my own trip to Whitby and Fish and chips.