I would seem that the position of the England manger is a cursed chalice as is the position of England Captain , many will hark  back to an age when the game of football was a true gentleman's game, My husband uncle was an England player Sammy Crooks and in his day was a manger too though never for England.

We were lucky enough to go to an England game and sat a cat whiskers away from Capello We were in  VIP Club Wembly seats. It was The England v Spain game.

To my mind he looked very involved during the game   , it was an England game that we enjoyed as a family you couldn't have wished for a better game. To sit in VIP seats to live how the other half lives if only for a minute. Those with the fame have the money it is a burden ! but it how you deal with it! 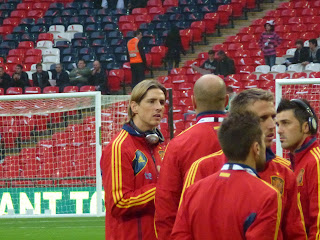 I don't know why  Capello was talking to at this point but if you look at the photos he is no longer smiling I wonder why ? Does any know who he was talking to ?

What ever is going on now it was a game and day we enjoyed , I only hope now we can have a England manager  that brings back pride and stability into the game will permeate all levels of the FA.