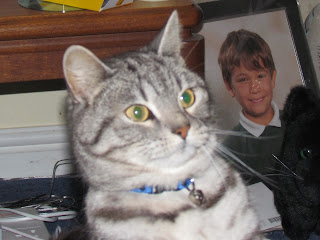 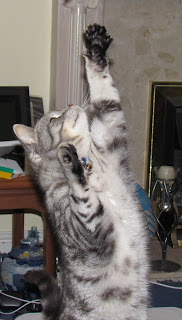 You really sure Rollie both paws up please... 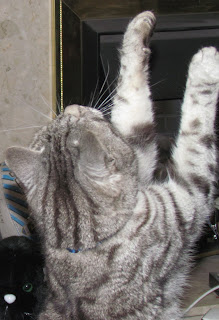 So the lovely Monkey at Cartridge Monkey decided to let Rollie have a go. 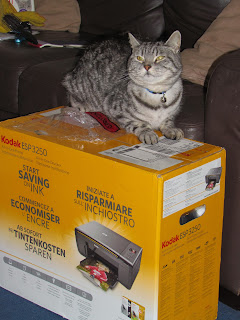 First thing we did was unpack the printer. 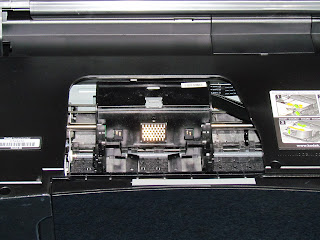 Next I opened the printer up and inserted the cartridge carrier . 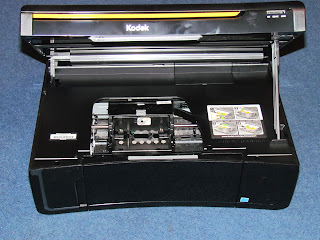 After  I inserted the ink cartridges. 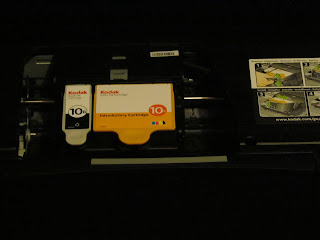 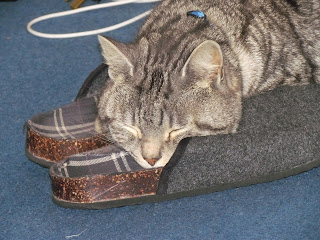 If only it hadn't fallen asleep on the job. I couldn't have Rollie shirking his reviewing job so I woke the cat up gently. 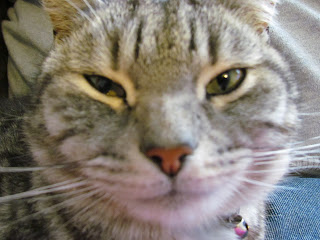 Though Rollie did look like he had been necking ten pints of larger......

The first test for the printer wasn't off the computer but was printing of the SD card. This made easy by reading the clearly supplied instrucion.s. The LCD screen is clear and easy to navigate. Rollie thought he could make a better photo than my son would. I disagreed a while later after Rollie had left a mouse's head on the kitchen floor aka Mogfather style, I relented....... 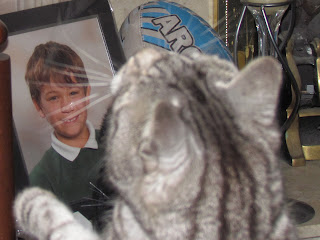 I am no Autism expert really. I don't have autistic children. I work with them. Many moons ago there was one autistic child who I was working with one to one. I worked the morning session. Now this child was very clever as autistic children are but  was very clever  and a bit naughty really. No throwing stuff around etc but in the minipulation  of the adults around them they were very very clever . The child played me up so I told them no reward, to which they  told me it didn't matter as they  would get their reward in the afternoon as it was a new session. So autistic  children are normal they can be naughty , and naughty for a reason just like a 'normal' child.
7 comments:

Never play hide and seek with a Ninja cat ....

You must never never never play hide and seek with a Ninja cat quite simply you will lose. When  Rollie the Ninja cat vanished it was " oh dear where it's gone.?" I feared for everything and everyone in my house. Until I found the smug little so and so hiding at the top of the stairs. 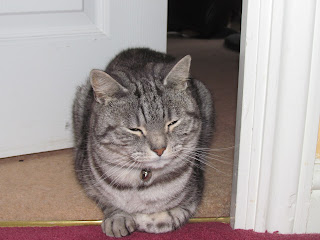 I am sure the cat is giving me a mocking look....

I turned my back and Rollie looked even more smug. 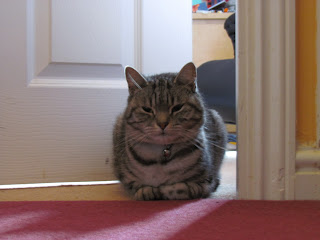 I turned my back again and it had tried to hide. This cat is why I sleep with one eye open at night. Look it tried to hide again. 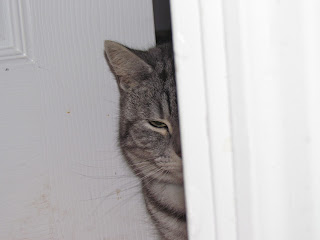 Help me that is a look of pure evil from Rollie . I am sure it 666 on its fur somewhere.

I have decided to have a little giveaway open to UK only  it will end on the    25 June winner will be picked by randomn org.

1. Follow my blog.
2. Tell me what you think Rollie favourite football team is by commenting.
3. Tweet the following "I am going to save @needaphone's soul"

The prize is some new WAHL hair straightners.

Email ThisBlogThis!Share to TwitterShare to FacebookShare to Pinterest
Labels: cat, hide and seek 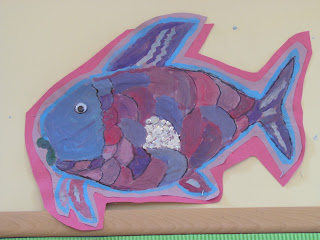 Hi meet Rainbow Fish part of my classroom display for the play corner. Now I have no art skills at all, but I managed to do this. I managed to sketch out the basic shape of Rainbow Fish and gradually painted it and added the detail. What do you think do you like it? 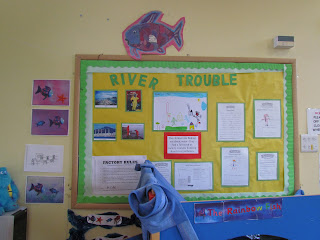 The theme this term is water So I was put in charge of this classroom display and play corner . The play corner is on a under water aquarium theme. Here are some photos. I designed the whole thing, I must admit Rainbow Fish  is a great educational resource. 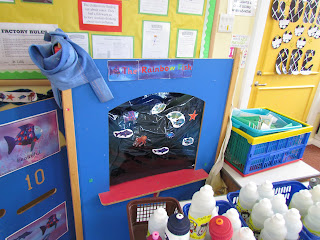 Note the cut out rainbow Fish characters on the blue film ( which is the water ). 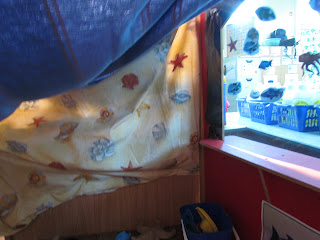 Here we go inside the aquarium shell material to the side and blue material covering the top. Honestly it really feels like an aquarium in there, shame I am too big too play in there. 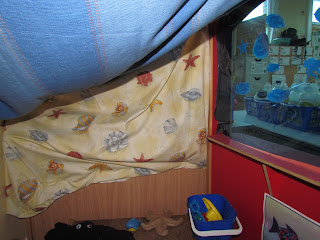 Look who it is! It is Olivia the bozz eyed Octopus though sadly her lips fell off. 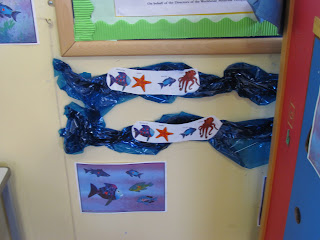 Careful those giant waves don't sweep you away! more Rainbow Fish characters on the waves. 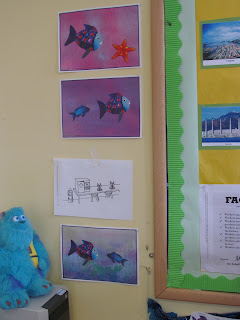 More Rainbow Fish  art . I hope you have enjoyed my pictures and I hope it gives you ideas for your classroom or at home. It is so simple to do and encourages a multitude of play ideas and helps promote their leaning. I welcome your comments. Thank you.

What do you do when you have got an evil Ninja cat and it s demanding milk?. You can not give in however much your scratched leg,arms and sofa tell you. This is because of the high lactose content in cows milk. Just don't do it even if they give you a silly look.... 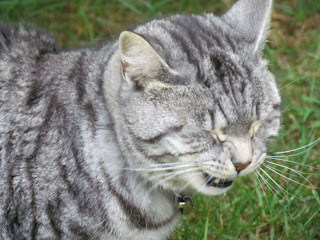 Not even if they give you an half closed eye dozy evil stare.... 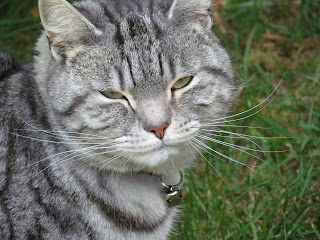 So it was lucky those lovely people at Whiskers had given me Whiskers CatMilk to try..No not me the cat!

So Rollie decided to give it a go Here is the product description " Most cats love milk. "But did you know that the lactose (milk sugar) found in cow's milk can be difficult for some cats to digest? Whiskas® Cat Milk has been specially developed by top nutritionists and vets to provide a healthier alternative.


For starters Whiskas® Cat Milk contains much less lactose than you'd find in the same amount of cow's milk. It's also got the same great taste of ordinary milk and is a natural source of calcium (which will help keep her bones strong and healthy). Every lap is full of goodness."
Rollie decided to try the Milk out in the garden as it wasn't too hot.

By the end of it all Rollie was totally satisfied. 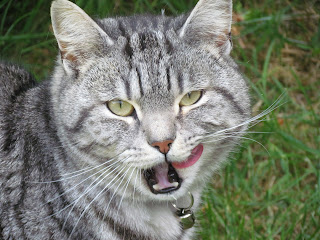 I must admit it looked good enough to put into my coffee! though I didn't.
With the Cat Milk the cat should also have water available with it at all times as well. As the Cats Milk is a complimentary pet food.Thank you Whiskers. Please visit Whiskers at  http://www.facebook.com/WhiskasUK
6 comments:

Having won a Kandela wand and candle. The magical people at The Wand Company have let Rollie( with help as the wand is not a toy) have a Kymera wand.


Rollie was bored with his plans for world domination. 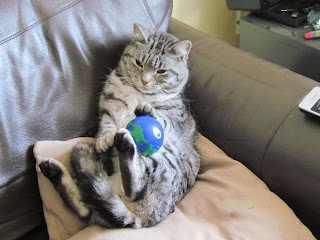 Rollie was fed up doing Karate. 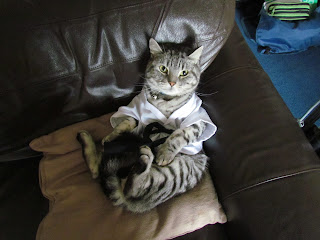 Rollie was fed up with the boring remote control. 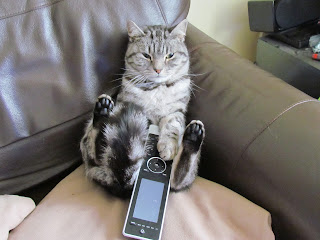 So Rollie decided to review the Kymera wand ( with help) 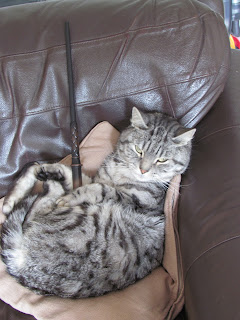 Kymera Wand what is it first. It is a Universal remote control is is made by the truly wanderful The Wand company. If you operate can a Wii remote you can do this. It can learn up to thirteen gestures by remote control. The thirteen gestures need not all belong to the same device. My favourite was the Big swish . I so wanted to shout something from that Wizard film.... 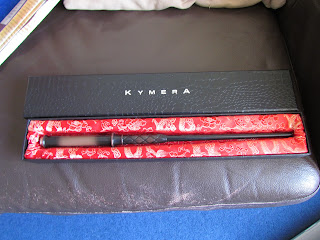 From start to finish you feel as if you have been selected to go on a magical mission. If only it would stop Ninja Killer cat killing. He has a new collar its not as if his mates are snickering at him behind the bins. It comes in a white box within that box is a smaller box with Kymera printed in gold letters.
Also inside there are beautifully printed instructions easy to understand with  a multitude of languages. 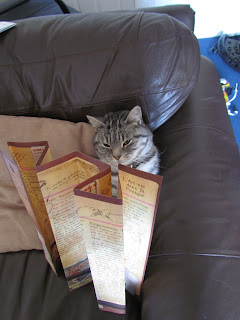 The wand has a nice look and feel to it. You just don't think that it is plastic but some sort of exotic wood .


There is a practice mode which doesn't need explaining does it. Well you can practice without it learning the function. It comes with batteries which is a bonus specially if you give it as a gift.

To program, you first have to hold it pointing up and tap it with your finger in the central carved. Then execute the movement that most suits you, and press the remote button you want to turn this trend pointing to the wand. If you have  follow the steps correctly, the wand is programmed in the same frequency as the control and movement associated with the button.

Perhaps the wand is best suited for television functions you decide its up to you. It is a fun item that entertains yet has a practical use. The only down side for me was when you using to change channels on my sky box you, would end up with arm ache changing from one end to another. i would like to see the wand be able to learn number functions to make this easier.

The wand is for you is you love Harry Potter, love gadgets and love fun in your life. For me it was the closet I came to magicing Ninja Killer cat away or visa versa but it didn't.

You can buy wand at various places but why not visit http://www.kymera-wand.com/
3 comments: