Ever Feel As If You're In An Ealing Comedy

It started when I was at sainburys in the cafe just getting something simple to eat , I mean life can't be complicated with 2 soups and 1 jacket potato can it now ? it's less confusing say than the E U referendum . Well obviously the answer is yes a simple visit to a supermarket cafe that saw us ordering
2 soups
1 jacket potato with Tuna Mayonaise
3 chocolate orange iced frappes.
Now I don't have that much fish as I have an intolerance to the stuff > sobs quietly in a corner but I manage it with antihistamines.
Any how when the order arrived there were 2 soups but no jacket they'd forgotten it and to be fair we hadn't noticed when we were paying .
" it's the universes way of telling you it knows you're on a diet "
Then my son found a piece of cardboard in his soup do that had to be changed and we were refunded no quibbles .
Oh how we laughed as I shuffled off to get a meal deal to eat at home.
I thought the day couldn't get any worse (you cling onto that small morsel of hope that whispers in the wind past your ear or in my case a slightly hysterical laugh.) My husband certainly received an email he'd received a parking ticket whilst picking our son up ( he'd pulled into the Carpark and waited longer than he thought ( it used to be one of those car parks without cameras and you could drop people or pick them up. So rightly so as they'd installed cameras he was fined £60 for this oversight on his part ... my only error that day was to leave the lid off the tea canister .
Then I thought tea solves everything then crash bang wallooooop
And the very same mistake moment the cat brought a dead mouse in arrrghhhhhhh.
No it wasn't a Dick Van Dyke interlude my old kettle decided to blow up on me ( it was only  2 months old ) so straight to Currys to swap it for another one and Currys were fabulous they even priced matched it as we found the kettle pictured below £10 cheaper at Argos. 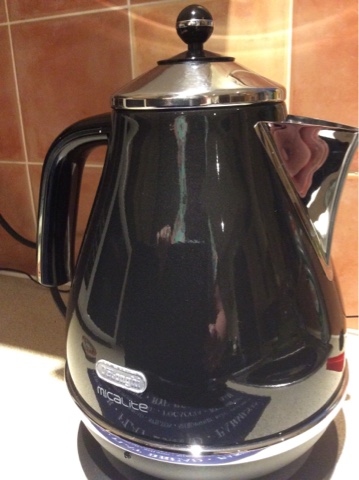 So new kettle In hand I was ready to take on the world > then I got a virus which I have just about got over .....
Ever feel as if you're in an Ealing comedy ?