The death of a cat is never easy and it never will be . I had lost the count of times when we went to the vets with Rollie for his annual routine injections to be told


"But it's Rollie , he's always like that he lives on his nerves "

We tried feeding him first but it didn't work Rollie was Rollie and slim as a bean he was , not quite sure how a bean can be slim , who on earth came up with such a a phrase I'll never know.Rollie was very unique in the world of cats and indeed humans and I am far from unique is saying cats are brilliant

"Cats do exactly what they day they do on the tin


As the sunlight hit the ears of Jack I knew everything was going going to go on the earth would keep spinning and in some way my life would ecpdaiantly be unconvinced by my cat Jack in some way or other. One of the hard things is to type cat and not cats and I miss not finding Rollie in the sink , on the sink , on the bread board and basically anywhere else that he shouldn't of been.

The heart break is such as my son asking


"When are we going to pick Rollie up '

And that was one of the hardest things for me to take in. So I had to immediately ring Mr T and he rang the vets as I couldn't get hold of them on the Sunday despite me trying and I hadn't wanted to tie up their emergency line . Mr T rang the vets ( the news wasn't good  and J had only one lesson at sixth form sixth form so they went the the vets to say good bye . I had already said my goodbye went we went the the mergence vets on Friday , I can not deal with the end of life stage ever since losing my childhood pet cat Boots and my first cat as a couple Bilbo pretty much within a week of each other. I was at the hospital when all this was happening and it was closure of sort for my husband and son but we will always remember Rollie.

I had spoken to the vet on Saturday and this was went the vet said that they thought it was a brain parasite in the form of Toxoplasmis  and that they were going to treat him with antibiotics /steroids. The next stage the vet said was MRI scan and brain fluid and this was where we had the conversation that about the scan , the vet has to remain impartial in this situation as what ever source of action is down to the owner . I said "So if the steroids and antiobitcs don't work this is a situation that they can't come back from . The vet was good and allowed me to reach my own conclusions , there is always that glimmer of hope and I think the glimmer of hope in important in any time of need situation.


They both cuddled him as he slipped away and it wouldn't have been Rollie my husband said if Rollie had extracted some sort of revenge on them and fluffed all over their clothes.Rollie was part pedigree and really the most beautiful cat in the world and when we told him he was a cat he looked at us with his beautiful evil eyes , and with no pun intended if he had been a  little but for on the fluffy personality side then we would have shown him he was hardcore. He looked good in black and white photos ,colour you name it he was a show off in the best sense of the word . In fact he had it nailed before Kim Kardashian * I think he showed her the ropes so to speak but he did with more style and didn't have a big booty to match. 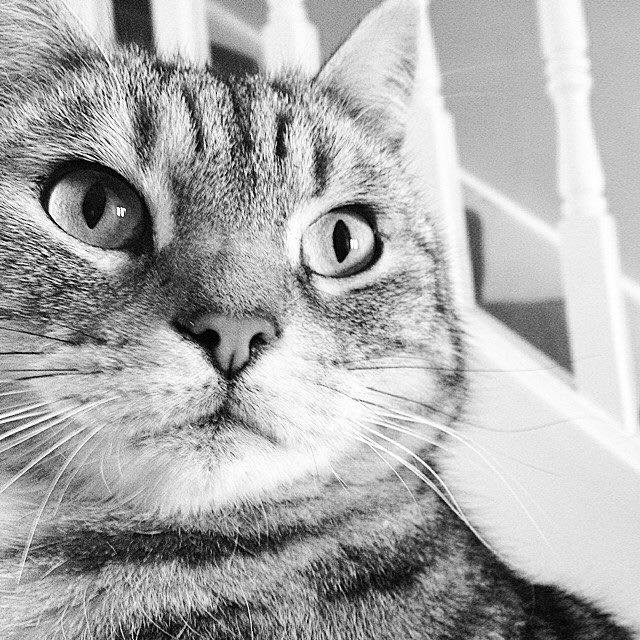 Ironically the death of Rollie Ninjakillercat is one of the easiest things I have had to write about , it is part of who I am Rollie is the reason this blog started and in all honesty , brutal honest cold hard of light of day truth combined with certain friendships I wouldn't be here today if it wasn't for theres reasons.

Cat and humans are partnerships like Bert and Ernie from Seasame Street or Morecombe and Wise , Rollie was very much the straight man in the comical stakes.
Rollie 2008 -2017