What Sort OF Character Has Your Cat Got ? 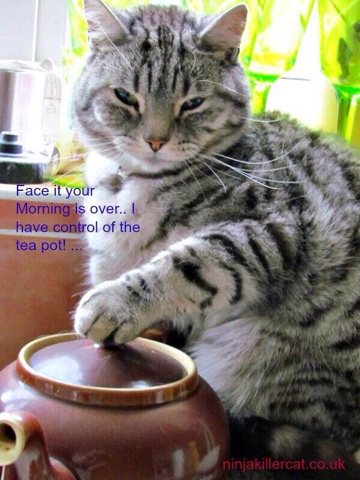 What sort of character has your cat got ?

Rollie has quite a calculating side to him and he is a very sleek male, he lives on his nerves , he is very much like his owner =me except for the sleek bit ( something wrong there )

Rollie is sulking this week for some unknown reason and is refusing to sleep in the bottom basket of his bunk beds, yes I am the owner that has bunk beds for their cats. Believe me we have gone through all sorts of sleeping arrangements for Rollie as he is very fickle . ( I have to admit I am very fickle over my pillows which always seem to die on me ! why is that ? )

Tabby cats are very distinct and Rollie is a Silver Tabby , he doesn't have the posh pets papers but we don't tell him that ! He won't do anything unless he has to and that includes meowing to get out of a door. Rollie won't set on my lap but will sit on my husbands this could be as my husband has the cats treats ..

Rollie has got a wild personality and is free spirited and will do what he likes when he likes with a side order of kindness thrown in. HE won't commit to a decision unless he really has to , * this is really sounding a lot like me.

Rollie has a habit of destroying my sons homework by throwing up on it / biting holes in it.

Awwwh Rollie you rebel we love you .